Carrie’s paper on the dynamic molecular evolution of animal germ line genes is accepted for publication in BMC Evolutionary Biology!


Sam and Seth‘s paper describing the creation of a dataset of over 10,000 measurements of insect egg shapes and sizes is accepted for publication at Scientific Data!


Sam and Seth’s preprint presenting evidence for the hypothesis that ecology, rather than allometric or developmental constraints drive the evolution of insect egg morphology is now available on bioRxiv! [PDF]


Didem’s preprint describing the resuts of our first studies on Hawaiian Drosophila is now available on bioRxiv! [PDF]


Leo and Tamsin’s preprint suggesting that horizontal transfer of bacterial DNA contributed to the birth of the oskar gene is now available on bioRxiv! [PDF]


Farewell and congratulations to Diede de Haan, who is off to become a PhD student at the Weizmann Institute in the Gal lab!


Some of the many animals that our lab has worked with over the years were featured in the original logo of the 2018 annual retreat of the MCB Department! This beautiful log was designed by Haneui Bae. Read more about the retreat here. 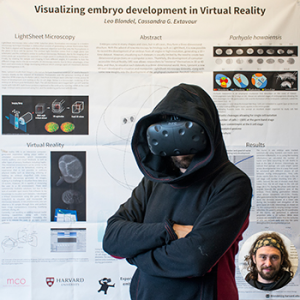 
Austen and Taro’s preprint suggesting a role for Hox genes is now available on bioRxiv! [PDF]


Welcome to Honghao Song, a graduate student in the OEB graduate training program!


Welcome to Maitreyi Upadhyay, a postdoc who will be working on ovarian development in Drosophila!


Farewell and congratulations to Seth Donoughe, who is now a University Fellow and Jane Coffin Childs postdoc at the University of Chicago, working with Sally Horne-Badovinac and Ed Munro!


Farewell and congratulations to Taro Nakamura, who is now an Assistant Professor in the Division of Evolutionary Biology at the National Institute for Basic Biology!


Cassandra is a Co-PI on a 5 million dollar award fom the National Science Foundation and the Simons Foundation, to establish the NSF/Simons Center for the Mathematical and Statistical Analysis of Biology at Harvard University. This is one of four NSF/Simons-funded centers in the US that will support novel research that aims to develop and use new mathematical and statistical tools to understand biological problems, particularly cell fate acquisiiton, self-assembly, and morphogenesis. At Harvard, we will work closely with the Quantitative Biology Initiative. Read the Harvard Gazette article.


Seth’s paper on a customizable device for injecting and imaging large numbers of embryos at once is accepted for publication in Biology Open.


Farewell and congratulations to Eva van der Heijden, who completed her rotation in our lab for her Masters through the MEME program in Evolutionary Biology!


Farewell and congratulations to Savandara Besse, who completed her Master’s and is off to become a PhD student at the University of Montreal in the Pechmann lab!


Farewell and congratulations to Austen Barnett, who is now an Assistant Professor at DeSales University!